TR 808 - a celebration of club cultures

We designed, then constructed a museum space within the gallery using compressed wood board and other simple cost effective building materials. This spacious museum filled much of the gallery, although there was ample space for visitors to walk around the perimeter and through the well appointed sculpture garden, complete with astroturf. The central atrium acted as a hub for the numerous different wings of the institution. Each wing was appropriately named, dedicated and formally opened on the evening of the private view. The museum was filled with over 200 works (of appropriate scale) created by over 200 carefully selected painters, sculptors, photographers, designers, video makers and writers. This large pool of talent had a broad international flavour, including artists from Britain, Canada, U.S.A, Germany, Austria, France, Denmark and Australia amongst others. The participants comprised a lively mixture of more established figures with newly emerging artists.

At Museum Magogo we pursue a lively curatorial policy to ensure that our collection is continually updated and expanded with additional new works. Patsy Forde has provided us with work from her archives for the Jameson Memorial Annexe. Neil Beggs, Belinda Guidi and Kevin Kelly are presently missing in action in the French Alps but will hopefully return safe and well with their artworks next week. From further afield there will be new video works on show in the New Heads Video Lounge by Daniel von Sturmer and Meri Blazevski, both based in Melbourne. In addition to her video Blazevski will also present two new photographic pieces. We will be installing a large photo storyboard by the Danish magazine collective Artland International early next week. Apologies to those of you who were expecting to see Andy Warhol’s seminal Crash pictures. Due to unforeseen legal difficulties it was impossible for us to obtain these works for Museum Magogo. Art and Language were just too miserable to send anything.

The curators of Museum Magogo would like to thank the following people for their invaluable help over the past few months of frenzied labour. Those who helped with the building and installation work, Patrick Jameson, Jim Ward, Colin MacFarlane, Leigh French, Simon Shaw, Paul Embleton, The Glasgow Independent Studio Committee. Deborah Holland Clara Ursitti Clare Simpson at Glasgow City Council Arts Development. Mark Beever Nathalie de Briey Alan Currall. Finally, thanks to all the artists who have contributed work for the show, many of them at extremely short notice. The Museum holds work by artists from Scotland, England, Denmark, Spain, Japan, Australia, Canada and the U.S.A. Apologies to anyone we have inadvertently omitted from our list of thankyous but our brains are a little tired. We hope that you enjoy the show.

Forget Edinburgh’s Dean Gallery, don’t worry about Dundee Contemporary Arts. There’s a new art museum in Glasgow and we don’t still mean the Gallery of Modern Art. Welcome to Museum Magogo, constructed from cardboard and glue by Beagles and Ramsay, the city’s current answer to museum maker Peggy Guggenheim. But while the pair have patiently crafted a working architectural model using scrumpled up paper and cereal packets, they’re not (only) joking. The Glasgow Project Space has become the crazed art museum of the month. It has all the facilities you would expect from such an august institution with it’s varied rooms named after illustrious benefactors: there’s the Jameson Memorial Annexe, The Chicken Wing and, best of all, the Rope-a-Dope Sculpture Garden, beautifully landscaped with astroturf. Filling the gallery walls, floor and even the ceiling are contributions from literally hundreds of artists. The result is a bit like a drunken party . Crossing the room you engage in conversation with one work, turn your back on another, narrowly miss stepping on something and laugh loudly at a joke, while someone is weeping in the corner having just been chucked. As well as practically every young Scottish artist you’ve ever come across (and many you haven’t) Beagles and Ramsay have contributions from impressively wide sources. Unfortunately, the expected Andy Warhol couldn’t make it due to insurance problems but there’s input from Terry Atkinson, posters from Bob and Roberta Smith, a questionnaire to fill in from London collective Bank and work by New York’s Guerrilla Girls. But museum as muse? This is museum as monster. But it is also museum as mate – a mad, inspired, generous, exhausting, down-the-pub kind with underlying serious intent. 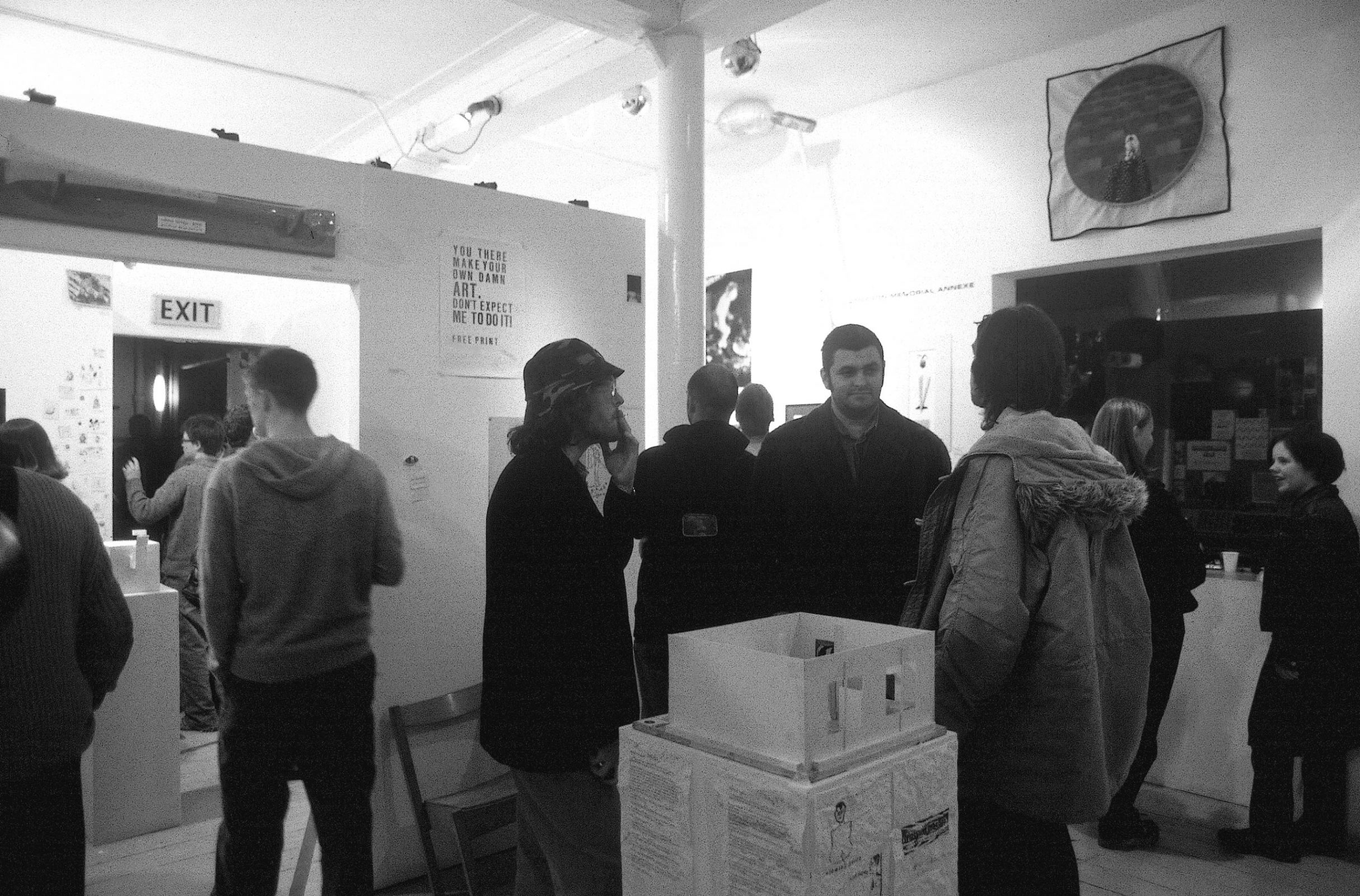 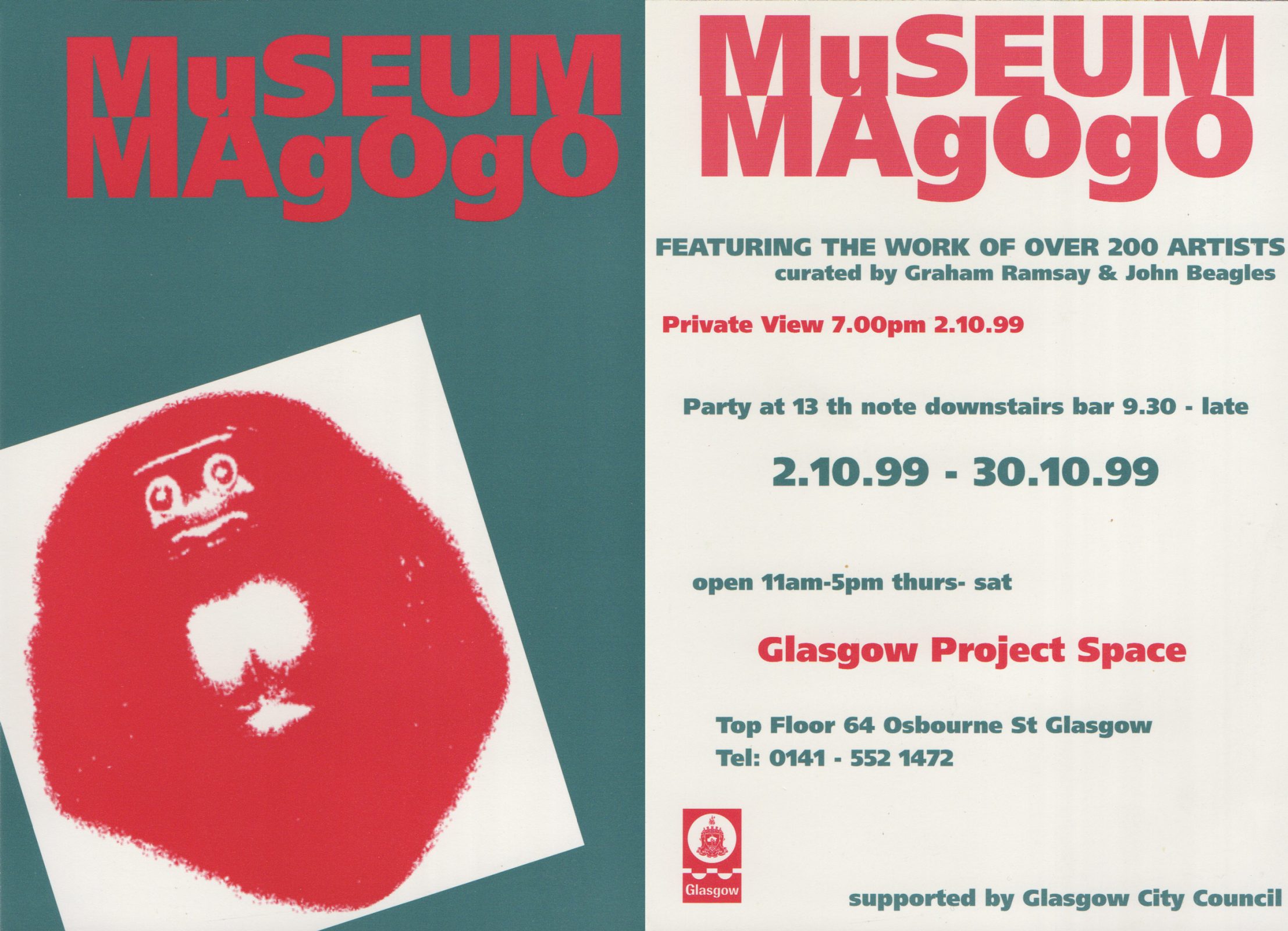