A catalogue produced to coincide with the survey exhibition curated by Felicity Lunn & Heike Munder. 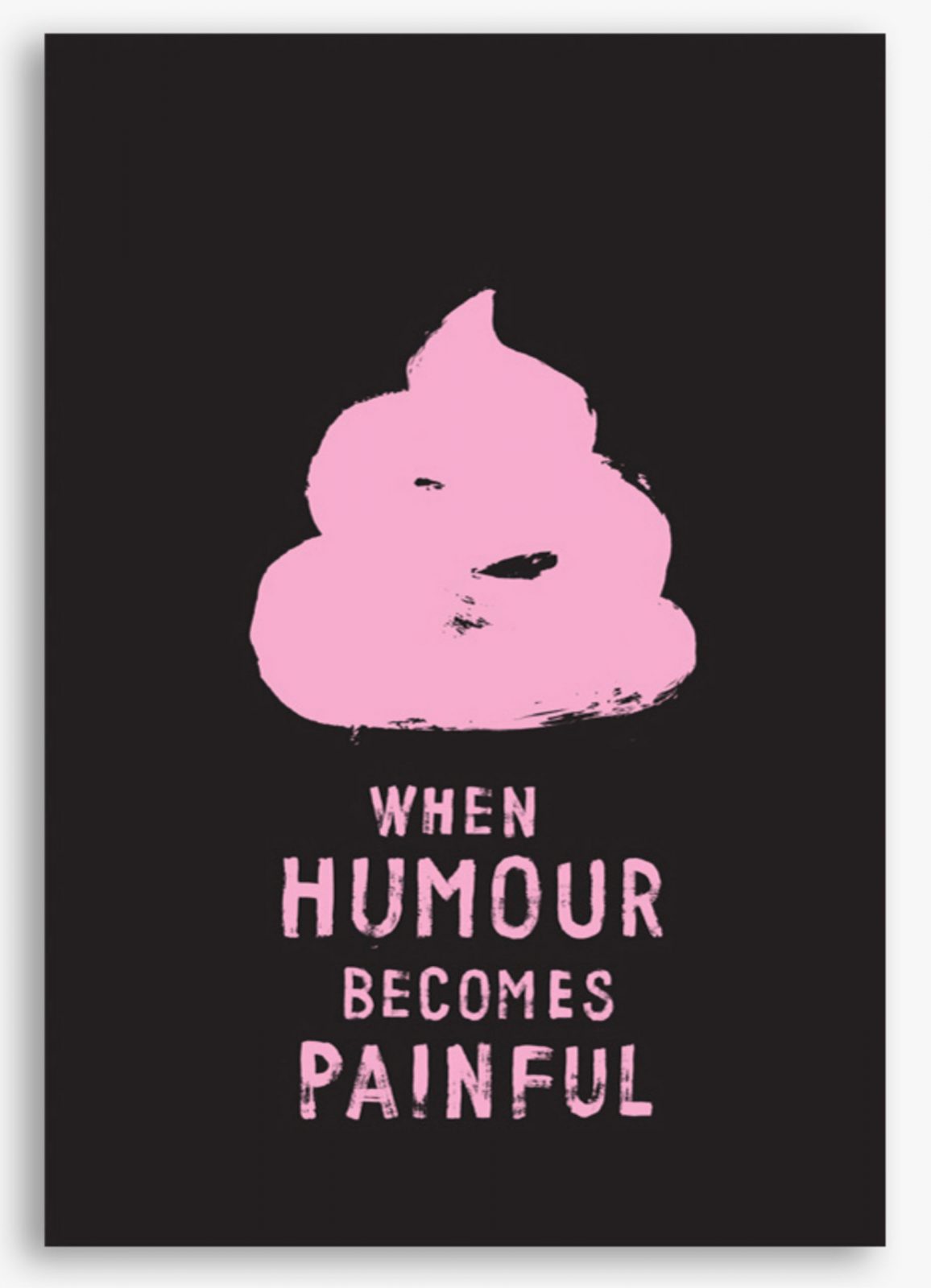 From Dada to Fluxus, Conceptual Art to the nineties generation, humour has been at the core of art as both a visual strategy and a philosophical process. Rather than straightforwardly presenting the comic, satire, irony or the grotesque, the theme of this exhibition is art that makes a precise incision into the mechanisms of humour itself. When we get hung out to dry, exposed, unsure of whether the poignancy allows us to laugh or cry. When Humour Becomes Painful.

Since Freud, humour has been regarded as the clearest manifestation of a collective unconscious, the returned debris of the repressed social self. Humour and art have much in common, both acting as a bridge to an irrational world of intuition and instinct. They also share the same marginal social spaces, where norms, morals and taboos are confronted head-on. In this way wit, irony, and the comic function as psychological ventilators, allowing failure and existential angst to be dealt with and better understood.

The subversive power of humour makes it impossible to define. Concerned with human behaviour, humour is not an abstract feeling or atmosphere but rather a method of dealing with these, and can be understood only through experience. Bringing recent art historical precedents such as George Maciunas’ Flux Smile Machine and Joseph Beuys’ Capri Batterie together with contemporary work, this exhibition is about art that seduces us in the first instance with its evident humour, to then stop us in our tracks with the more painful or uncomfortable themes that it uses humour to explore. The participating artists never employ humour, whether formally or in terms of content, as an end in itself but use it in order to create a space in which, through criticism, provocation and exposure, they can investigate other emotions, relationships and connections.

The ambivalence of humour, its ability to shift between the utopian and the destructive, intelligence and stupidity, and perhaps most important of all its refusal of absolute values, lies at the heart of the twentieth century art movements that continue to exert an influence on today’s artists. Formal links can be made between Anna & Bernhard Blume’s absurd world of inanimate objects brought to life and Boyd Webb’s surreal universes. Fluxus and early performance used humour provocatively as a means of both attacking socially acceptable norms and seeking a new function for art. Deconstructions of the male artist persona by Vito Acconci and Jurgen Klauke employ wit to confront aggressive and sexual taboos head-on, forming connections with the more recent explorations of artists such as John Bock or Klara Liden. These and other artists in the exhibition do not tell the viewer how to react, but rather suspend them in limbo between amusement and discomfort, the playful and the serious, pessimism and optimism.

Wit in the relationship between image and language is one of the clearest pairings of nonsense and intellect. Fischli & Weiss and Jake & Dinos Chapman employ titles that create a crucial tension with the work itself, while the manipulation of speech is intrinsic to the relationship between humour and discomfort in the videos of Mark Wallinger and Beagles & Ramsay.

From Bruce Nauman’s angst-ridden pacings in his studio and the self portrayals of Jan Fabre or Mark Wallinger that approach the grotesque, to Alex Bag’s tongue-in-cheek interviews or Peter Land’s absurd photographic narratives, artists have frequently used their own body to explore artistic self-doubt. This ironic self-reflection injects a human dimension into their work, but also provides the artists with the freedom to stand outside both society and the art world – Martin Kippenberger is one such master of self-reflection. Although the artists always risk failing to seduce the viewer through humour, in choosing to use the comic to reveal weakness they are consciously refusing to enter power relationships. In this way the combination of humour and art presents a charged political reaction against contemporary models of organisation and behaviour.

The artists in the exhibition employ material and media in ways that highlight contradiction, overturn hierarchies and reduce the world to a human scale. The wit in the interpretations by Jake & Dinos Chapman of ethnographic imagery relies on a collective understanding of subversive humour; Hans Peter Feldmann and Jean-Frederic Schnyder plunder the tragi-comic nature of kitsch; and the dumb banality of Thomas Zipp’s barbecues condenses petty bourgeois aspirations into a single satirical gesture. This strategy of placing the everyday in doubt, of presenting the familiar alongside its distorted mirror image has, since Fluxus, continued to influence contemporary artists’ explorations of the processes of perception by revealing the bizarre within the banal or the potential chaos within order. In choosing to explore the mechanisms of humour, these and the other artists in the exhibition are stretching to the limit art’s ability to generate ambivalence and uncertainty, and also its potential for shredding existing and creating new meaning.