Reviewed by Lauren Dyer Amazon for Artforum and Dean Kenning for Artmonthly.

An exhibition of new work created by Beagles & Ramsay during a three-month Production Residency at the Glasgow Sculpture Studios (GSS) will launch the exhibition programme in the studios’ new premises. ‘Good Teeth’, opens in the GSS Gallery on Saturday 25 October from 7 – 10pm and runs until 19 December 2008.

A rolling programme of Production Residencies is one of a number of innovations introduced by GSS, which marks its 20th anniversary with the unveiling of new premises in Kelvinhaugh Street. Beagles & Ramsay have used the Residency to both devise and produce the work for ‘Good Teeth’, which builds on the ‘Glitter Desert Island’ and ‘Glitter Desert’ photographs, sculptures and videos from 2006  – 2008

Two key interweaving currents of interest drive the work of Beagles & Ramsay: the reoccurring use of fictionalised self-portraiture and, in broad terms, a critical examination of aspects of contemporary consumer culture. To date their presence within the work has largely been a performed presence – using doppelgangers as a means of speaking in alternate voices or drawing upon multiple personae. Inhabiting these shifting personae, has allowed them the conceptual space to explore aspects of contemporary culture – such as consumerism, political disenfranchisement, and the cult of celebrity – without the restrictions of a singular, authoritative voice.

In the recent series of Glitter Desert Island and Glitter Desert works the artists assumed the distracted pose and gaze of the rarefied dandy. Reclining on a gold glitter desert island complete with a fake palm trees, these spectral figures resembled decorative motifs from Rococo décor. These ghostlike dandies characters appear trapped and confined within void-like scenarios where bleak minimalist alienation met opulent, seductive excess   – Samuel Beckett meets Liberace. For the exhibition ‘Good Teeth’ they have extended the technical and conceptual form of these earlier works, in a large-scale sculptural installation which presents the viewer with a timely and fitting monument to mammon. ‘Good Teeth’ features the artists’ first neon work and a priapic glittering behemoth. 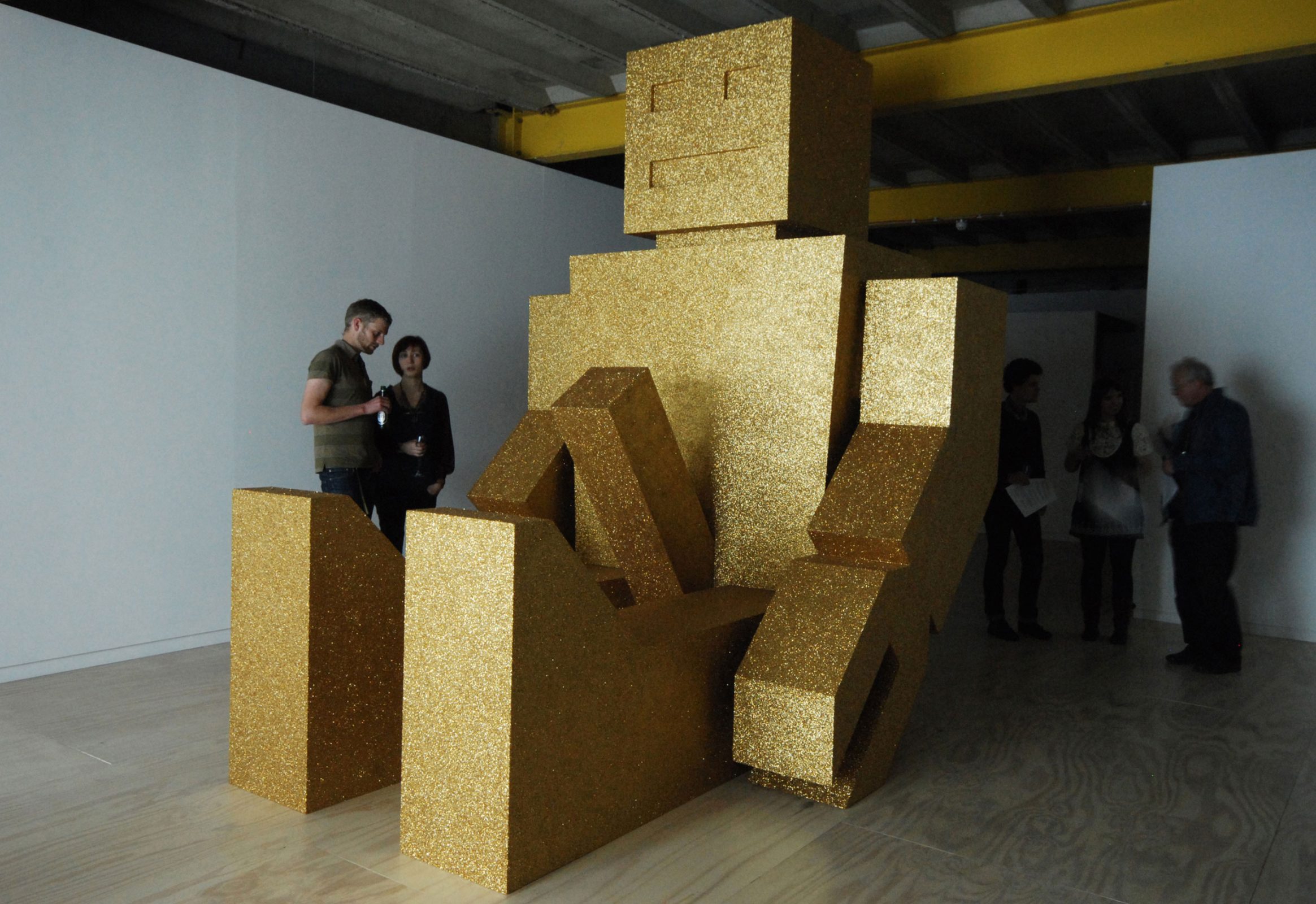 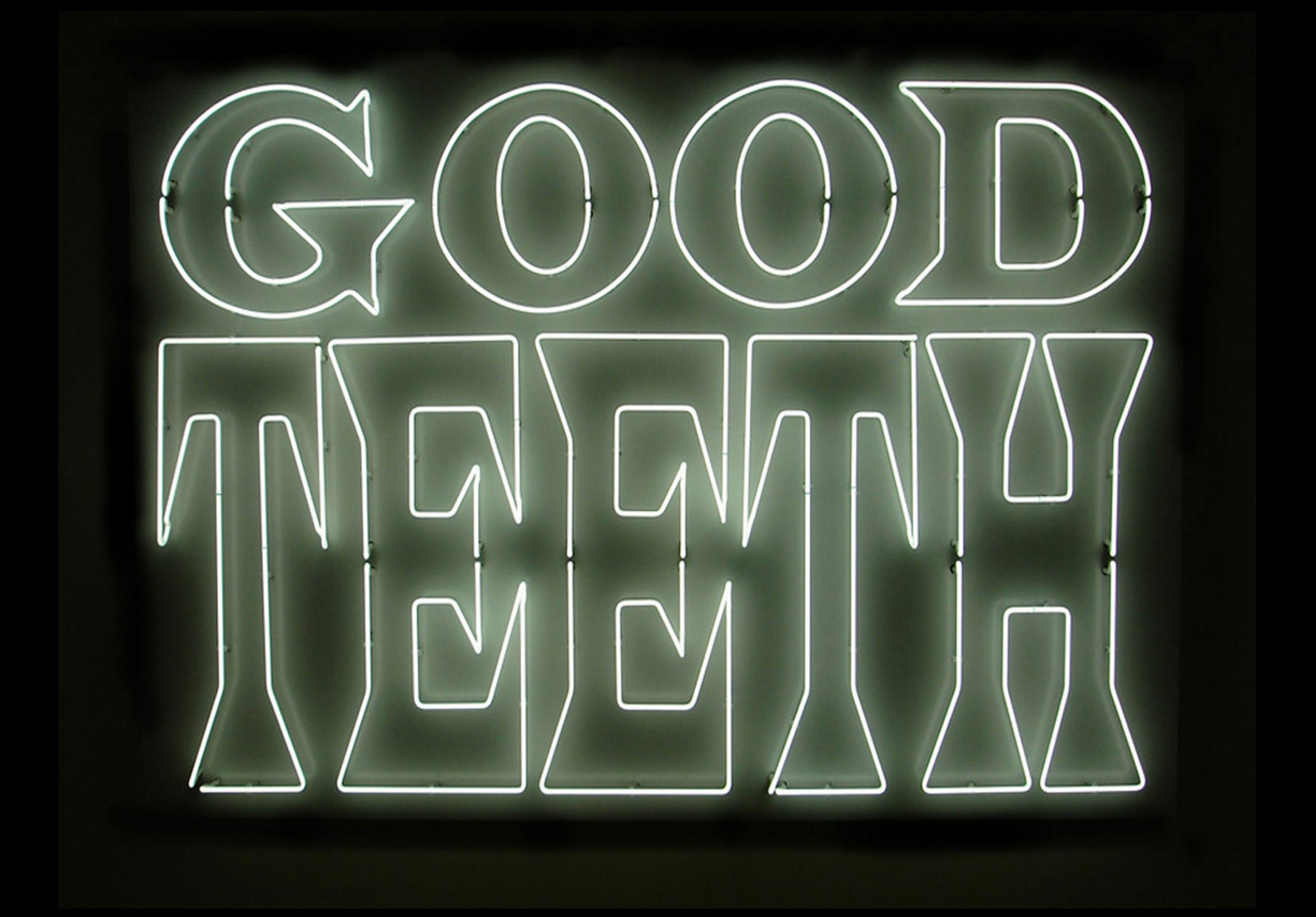 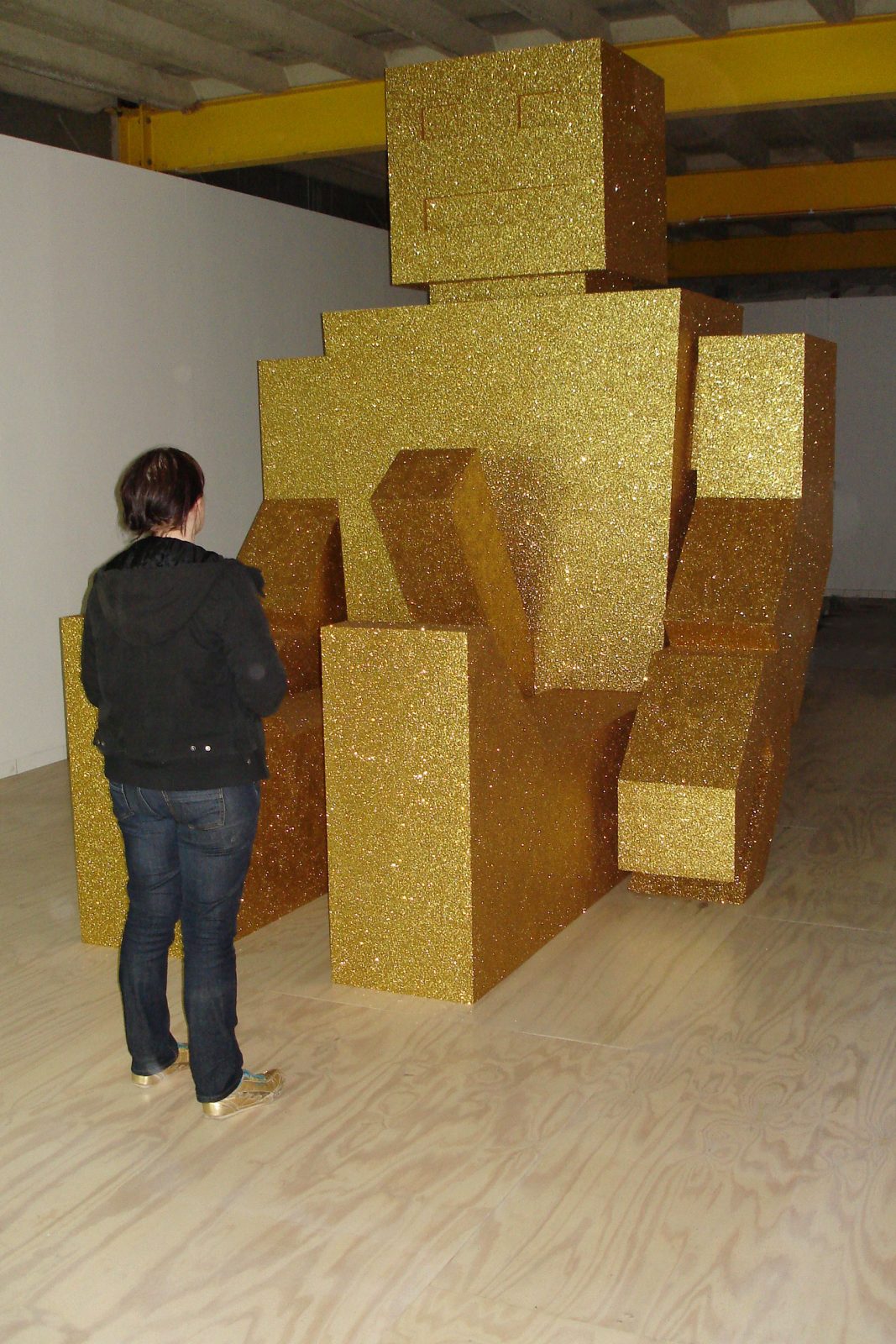 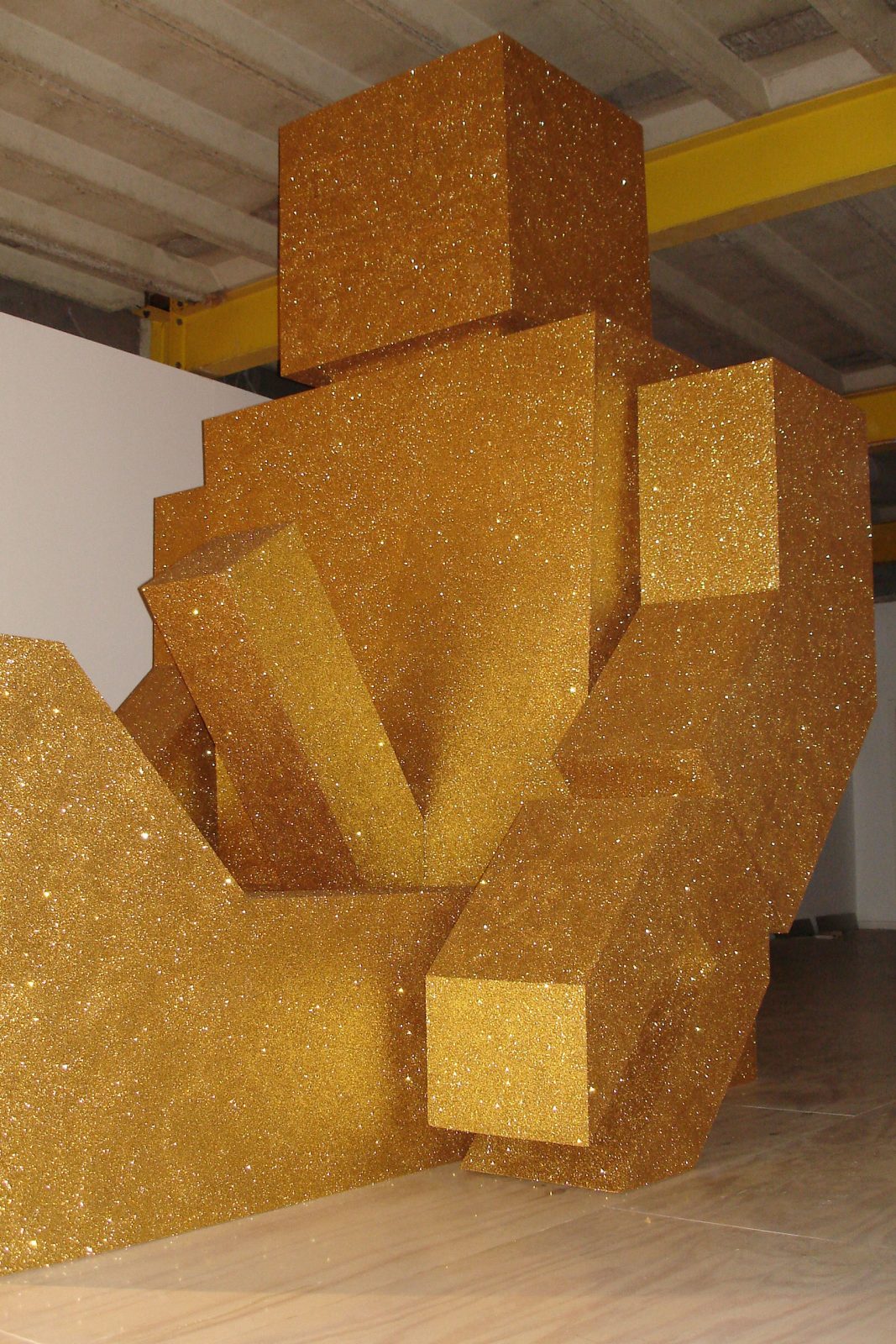 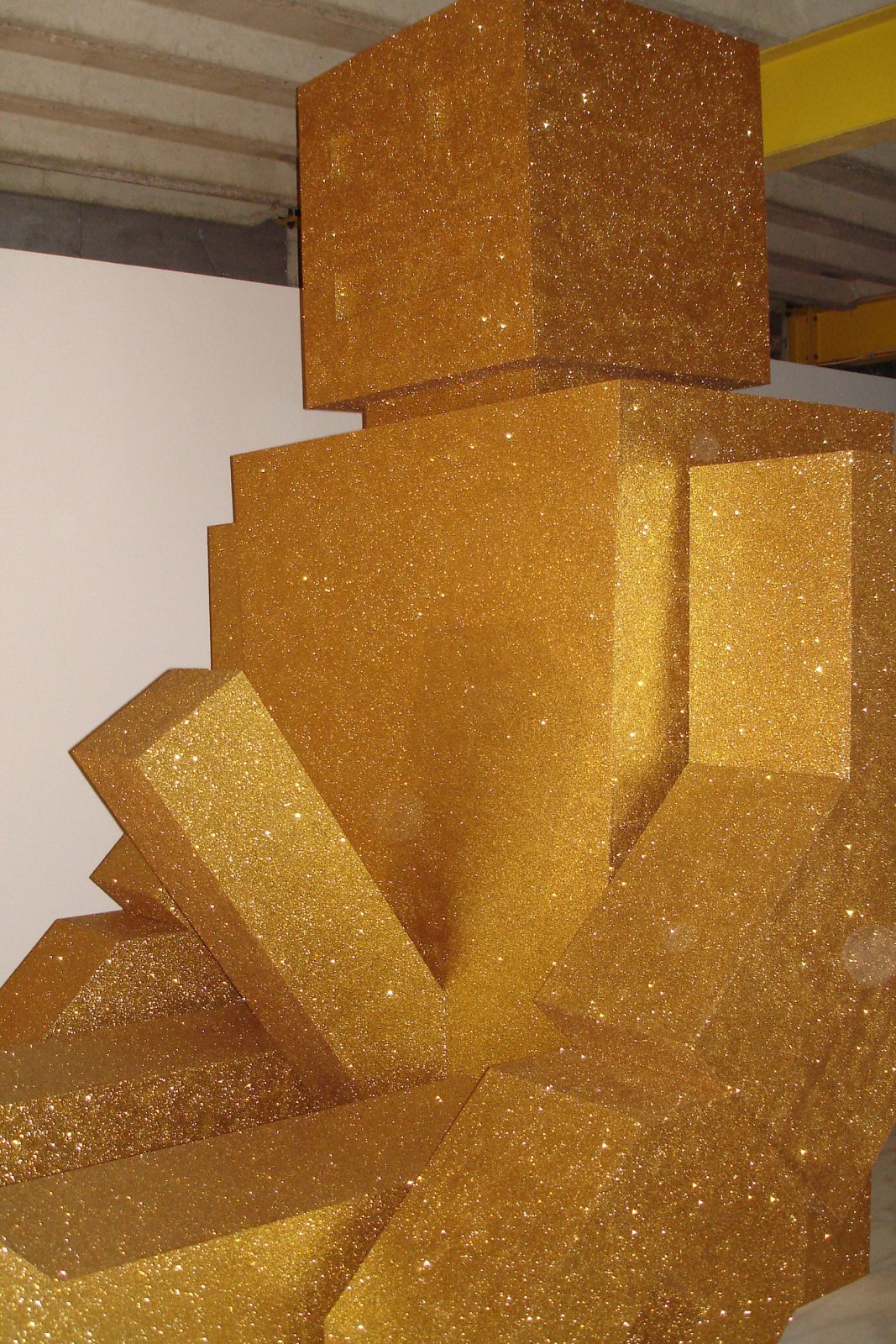